A craving for chocolate?
Discover

For over 80 years, Allard has been one of the most sought after gourmet addresses in Paris

Located in the heart of Saint-Germain-des-Prés, it remains one of the last authentic French gourmet bistros. Today still, the establishment is filled with the spirit of Marthe Allard, « mother cook » who founded the restaurant in 1932. Allard is above all the story of a peasant from the Burgundy region who traveled up to Paris carrying her sincere and generous family recipes.

In the early days, at the crossroad of Rue Saint-Andre des Arts and Rue de l’Eperon, stood a wine shop, as still visible by the metal bars on the windows – a law was passed by the regent requiring the profession to secure their shops in this matter. In the early 20 century, Vincent Candré moves into the neighbourhood, opening a bistro then called « La Halte de l’Eperon ». Here were served modest local wines (vins de pays) accompanied by terroir dishes created by Joséphine, one of the first « mother cooks » of Paris. In the 1930’s, Vincent Candré sells his restaurant to Marthe and Marcel Allard who build a real institution over the years. « Allard is above all simplicity in tradition, and tradition in simplicity! » as described by the customers.

A family bistro is born

From the 1930’s till the end of the war, Allard remains a neighbourhood bistro with a family spirit. After the war, restaurants become all the rage. Parisians gradually start dining out again. Allard begins to forge itself a reputation that consolidates itself from year to year. In the end of 1946, André, Marthe and Marcel Allard’s son, meets Fernande. The second generation prepares to take over and continue writing the history that was started by the parents. Immediately after getting married, Fernande found herself in front of the kitchen range, never to leave again. Marthe bequeaths to her all the secrets and recipes that she had fine-tuned over half a century. Rustic dishes transmitted from one woman to another, both originating from peasant stock. “Patrons don’t visit us to discover culinary novelties but to reconnect with old acquaintances”, André says.

In 1985, a page is turned. The Allard family sells the restaurant to Bernard Bouchard who, in turn, passes it on to the Aveyron-born Claude Layrac, in 1995. For over 20 years, the latter perpetuates the Allard family spirit and the fundamentals of its cuisine, such as the Challans duck with olives, the shoulder of Limousin lamb or the coq au vin. By passing on the restaurant to Alain Ducasse, he is confident: « This restaurant to which I am so attached will keep its personality, its character ». « Fernande Allard’s precious legacy will keep on inspiring us. Altering the DNA of the establisment is out of question, we are just going to connect it to today’s time » Alain Ducasse says.

Contact us to organise a business lunch / dinner or to privatise the restaurant Allard for your next event.

At Allard’s, women do the cooking !
Marthe first, followed by Fernande. Both of them are enscribed into the book of « mother cooks», creating a cuisine based upon a culinary instinct in which prevails simplicity and quality. Alain Ducasse naturally passed the reins of the Allard kitchens to a woman: Charlotte Bringant.

In the dining room, Alain Izard warmly welcomes customers, as they always have been in this legendary Parisian bistro.

The sommelier, Alexandre Foucher, speaks with passion about the vineyards and bottles of the cellar.

Allard is above all the story of a peasant from the Burgundy region who traveled up to Paris carrying her sincere and generous family recipes.

Check the menu Book a table 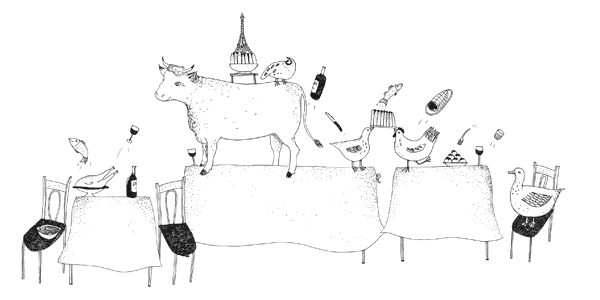